POLICE have issued a compound notice to Pasir Salak MP Datuk Seri Tajuddin Abdul Rahman for not wearing a face mask at the Parliament lobby.

Sentul OCPD Asst Comm Beh Eng Lai said the matter came to light following a tweet at about 10am, which stated that Tajuddin had breached the standard operating procedure on Monday.

“Investigations were carried out and about 2.30pm, he was found to be not wearing a face mask while with another individual at the Parliament lobby,” he said in a statement yesterday.

ACP Beh said Tajuddin was issued a compound notice for the SOP violation at 1pm yesterday, adding that the amount would be decided by the district health director.

Last month, Tajuddin was slapped with a RM1,500 compound for not wearing a face mask during a press conference in the aftermath of the collision between two LRT trains. 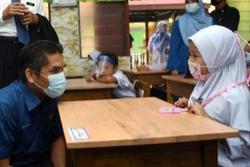