JOHOR BARU: The Johor government has attributed the main causes of the state’s rise in Covid-19 cases to the manufacturing sector and social activities.

State Health and Environment Committee chairman R. Vidyananthan said a majority of reported cases were among employees staying at workers’ hostels, which contributed to the overall number of cases.

“The increase in targeted screenings also contributed to the rise in positive Covid-19 cases in the industrial sector.

“Aside from this, the positive cases were closely-linked to social activities, especially festivities and funerals.

“The Jalan Bistari Yayasan cluster in Segamat recorded people traveling inter-state from Selangor to attend a family member’s funeral, which caused 23 of them to be infected with the virus.

He added that the variants of concern (VOC) had been identified in several districts such as Johor Baru, Mersing, Segamat, Tangkak and Muar but the numbers were small and within control.

As of July 26, only one locality, Felda Maokil in Muar, was still under the enhanced movement control order where 308 positive cases were identified out of the 691 people screened, he said.

Meanwhile on vaccination, Vidyananthan said a total of 828,921 people in Johor had received their first vaccine injection where 322,233 from the total had been given their second vaccination dose as of July 26 including senior citizens, the disabled and people with comorbidities.

He said 71,623 frontline workers in the state were also given their first vaccine dose and from the total, 67,004 had completed their two-dose vaccination.

He added 231 vaccination centres (PPV) were operating throughout the state where 41 were public PPVs, 12 were mega PPVs, 175 were private PPVs and three were industry PPVs. 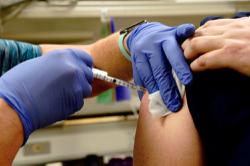