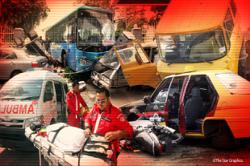 Dang Wangi OCPD Asst Comm Mohamad Zainal Abdullah said a 50-second video of the incident was being spread, which shows two men engaged in a shouting match at a traffic light junction along Persiaran KLCC on July 24.

"We have opened a criminal intimidation and insulting behaviour investigation according to Section 506 of the Penal Code and Section 14 of the Minor Offences Act respectively," he said in a statement on Monday (July 26).

He said the investigation papers would be referred to the Deputy Public Prosecutor's office once they have completed investigations.

"We urge the public to stop spreading the video as it could lead to public anxiety.

In the video, which was taken by the car driver, a motorcyclist is seen shouting at the driver who explains why he sounded his horn.

The motorcyclist then shouts expletives at the driver and tries to kick the car before attempting to open the front passenger's door.

The motorcyclist then demands the man to pull his vehicle over but the man says he would rather go to a police station.

The two then stop at a red light and the motorcyclist gets off his machine and approaches the vehicle and tries to open the driver's side door and the video comes to an end.