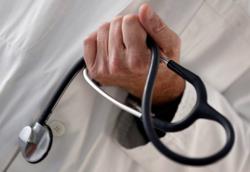 Pictures by Hadi Nor.

PETALING JAYA: A group of government doctors in support of the Hartal Doktor Kontrak movement began their peaceful protest at hospitals nationwide at 11am on Monday (July 26) to push for reform of the system which, they claim, hinders their career progress and offers no job security.

They handed over their ward duties to their colleagues before walking out, with some standing in the sun in the hospital carparks.

An increased police presence was reported in a number of hospitals.

At Shah Alam Hospital, a group of medical officers in black carrying placards stating “We want career security” and “Justice for 23K contract doctors” walked out of the wards at 11am.

One of the doctors interviewed said their supervisors are supportive as they are the future doctors.

“This is long term, we are not going to be temporary forever. We aim to be someone – how long do we have to be on contract and be insecure? We are the future,” said one doctor.

Another said that as much as they understand what Prime Minister Tan Sri Muhyiddin Yassin has offered as a temporary solution, it is not enough for the contract doctors who do not have the luxury of time.

“We are at the end of our contracts and this is a pandemic. We are here for the people.

“We want clear outlines as to who can be permanent staff. People who are offered HLP (Hadiah Latihan Persekutuan, a full scholarship from the Health Ministry) are very limited. What happens to those pursuing parallel pathways? Is there any other job appraisal apart from HLP or parallel pathways to get permanent posts?

"When we get masters, how many jobs are there? So, a majority of us will be laid off. Why contract extension for those pursuing masters and not permanency?” said one doctor who asked to be identified only as Dr S.

A spokesman, Dr Umar, said he is from the first batch of contract doctors and is now in his fifth year in this arrangement.

“Some of us have been infected with Covid-19 as we stayed here and struggled through this pandemic. I am still loyal to the Health Ministry. The top people seem to be 'chained'. For five years we have tried to discuss but no solution.

“We were offered sweets after five years. We are not rats. It is not fair that we are treated this way after five years as contract medical officers. Making us permanent does not disturb the budget of the government.

“Our directors and heads of departments did not allow us to be here but we are here. If we walk away, who will treat the patients? We want support for our plight,” said Dr Umar, who has been the face of Hartal Doktor Kontrak.

At Melaka Hospital, a group of medical officers and pharmaceutical officers in their medical outfits walked out to the car park in support of the Hartal carrying placards reading “We are your future specialists” and “Tetap, bukan kontrak” (Permanent, not contract).

They stood in the open with face masks and face shields, physically distanced and in silence, as media personnel recorded their protest.

In Kelantan, at Hospital Sultanah Zainab in Kota Baru, a group of contract medical officers also took to the carpark with placards in support of Hartal.

It is not clear how long they would be staying away in protest but the organisers stated that if patients need their services, they will return as they would not abandon them.

Muhyiddin also announced that the Cabinet decided to allow contract officers other benefits such as fully paid study leave, but did not address the group's demand for permanent positions for all government contract workers at present.

The government, in response to the group's demands, offered to extend their contracts to a minimum of four years. 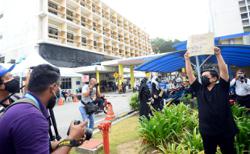