The deaths represent 0.79% of all cases since the pandemic began.

Eight of the deceased were brought-in-dead, while 84 died in hospital.

Of the new cases, 2.5% or 433 were in categories three, four and five when diagnosed, which means they exhibited pneumonia or other severe symptoms.

"This means that 433 cases were admitted into Covid-19 hospitals which are becoming more packed and crowded," he said.

Most, or 97.5% of new Covid-19 patients were in categories one and two (asymptomatic and mild symptoms).

There are 970 patients in intensive care units, with 501 of them requiring ventilator support.

There were also 34 new clusters, with 18 linked to workplaces and 15 community outbreaks. 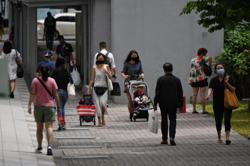