Over 40 houses destroyed in freak storm

Salvage work: A villager repairing a zinc roof that was blown away during the thunderstorm that hit Kampung Nara and five other villages in Pasir Puteh, Kelantan. — Bernama

PASIR PUTEH: More than 40 houses were destroyed and several others had the zinc roof blown away when a thunderstorm wreaked havoc at six villages near here.

Siti Mariam Zakaria, 39, from Kampung Nara, said in the 6pm incident, she was at a nearby shop while her four children, aged between 12 and 19, were at home.

“One of my children called to inform that strong winds had ripped off the zinc roof sheets,” she said, adding that she quickly rushed back and upon reaching the house, found her children huddled together in fear at one corner.

She said the bedrooms and kitchen area were flooded and most electrical items were destroyed.

“The garage shelter in front of the house had also collapsed. Total loss is about RM10,000,” said the single mother.

Another victim Siti Minah Mamat, 65, who lives in Kampung Hutan Jering, said she managed to seek shelter at her son’s house nearby after the roof above the living room collapsed.

Her youngest son Mohd Izat Hamzah, 20, escaped unhurt as he was near the living room when it happened.

He said immediate aid had been given out to affected residents to ease their burden. — Bernama 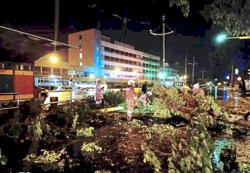