JOHOR BARU: The body of a man, believed to be in his 60s, was found near a beach in front of Hospital Sultanah Aminah here.

Larkin Fire and Rescue Department chief Suhaimi Abdul Jamal said that the body of the victim was found about 10m away from the beach on Friday (July 23).

"We received a distress call on a man who was found drowned near the beach at 1.08pm on Friday.

"Twelve staff members from the Fire and Rescue Department were deployed to the scene. They then found the body of the man around 10m away from the beach.

"The body was brought to shore and handed over to the police for further investigation," he said in a statement here on Friday (July 23).

Meanwhile, Johor Baru South OCPD Asst Comm Mohd Padzli Mohd Zain confirmed that the police have received a report about the incident and that the case has been classified as sudden death.

"The body has been sent to Hospital Sultanah Aminah’s forensic department for a post-mortem,” he said, adding that the identity of the victim is still under investigation. 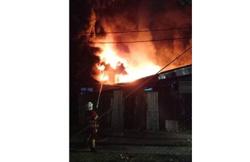