KUALA LUMPUR (Bernama): A total of 933 of the 1,142 construction sites that are in operation nationwide since implementation of the National Recovery Plan (NRP) on June 1 complied with the stipulated standard operating procedures (SOP), says Works Minister Datuk Seri Fadillah Yusof (pic).

He said a total of 5,766 construction sites were inspected nationwide during the same period with 4,624 of them found not operating.

"Of the total construction sites in operation, 209 of them did not comply with the SOPs and were ordered to close, and the reason being that they did not have the letter of permission to operate from the Ministry of International Trade and Industry (Miti) and also the local authorities," he told reporters after visiting a few construction sites in the city on Friday (July 23).

He said most of the construction sites that were ordered to stop operation were in Sarawak, totalling 56, followed by Selangor (46) and Kuala Lumpur (18).

Commenting on his visit to the construction site at Jalan Bukit Bintang and Jalan Yap Kwan Seng today, Fadillah said supervisors should be appointed to monitor workers’ compliance with the SOP and also to ensure cleanliness of the construction site to avoid the spread of Covid-19 and other diseases.

"No positive (Covid-19) cases were detected at both the construction sites, but there are still workers who do not fully comply with the SOP,” he said.

In a statement on Thursday (Jul 22), he said, Phase 2 of a CIVac, which will kick off on Aug 5, will involve 55,000 construction workers in Penang and Johor, while the registration for the CIVac program in Pahang and Sabah is scheduled to open on July 25 and July 31 respectively involving 20,000 workers for every state.

CIVac Phase One started on July 1 in Kuala Lumpur and Selangor with a target number of vaccinations to 40,000 foreign and local construction workers.- Bernama 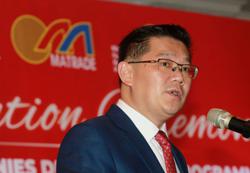