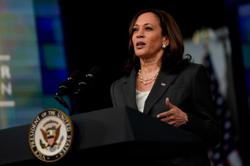 JOHOR BARU: An Umno leader has called on party members to appreciate the true meaning of sacrifice and remember when the party was first formed.

Vice president Datuk Seri Mohamed Khaled Nordin said that many made a sacrifice by giving up their happiness for a better future for the next generation.

“Umno started with this spirit. Many went home without enjoying a better or easier life. Nonetheless the Malaysia they fought for and left has become better and more successful,” he said.

Mohamed Khaled quoted Scottish poet Robert Louis Stevenson who said, “Don’t judge each day by the harvest you reap but the seeds you plant”.

“A party (Umno) which is better and more developed will only rise with such a spirit,” he said, urging for sacrifices in terms of those with positions and power for the sake of the party being more respected in future.

He advised those who have sacrificed not to be sad as whatever that they have lost would return in other forms.

Mohamed Khaled stressed that life requires a lot of sacrifices as it was a struggle to earn a living, to have a better life, to fight against a disease and others.

He said a sincere person who fights would be willing to sacrifice and be sincere about it.