PETALING JAYA: With less than a week till Parliament reconvenes for a five-day special sitting, Datuk Seri Shahidan Kassim (pic) claims that the support of 42 MPs from Barisan Nasional for the present Perikatan Nasional government is assured.

"It's unfair for me to say two or three MPs are not supporting, but as far as I'm concerned, Barisan MPs met two days before the DPM appointment.

"We agreed that all of us will support the present government," he said.

Shahidan said MPs from Umno, MIC and MCA must abide by this decision, as they contested under the Barisan ticket in GE14.

Shahidan also denied speculation of a plot to topple the government when Parliament reconvenes.

He said they were already in the government and there was no reason to be part of the Opposition.

There are concerns over support for the government after Umno president Datuk Seri Ahmad Zahid Hamidi on July 8 said that the party had decided to withdraw support for Tan Sri Muhyiddin Yassin as prime minister. 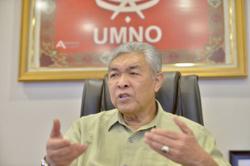