SHAH ALAM: The Sultan of Selangor, Sultan Sharafuddin Idris Shah (pic), is very worried if there are still those who are stubborn enough to return to their hometown for Hari Raya Aidiladha.

Through a statement on the Selangor Royal Office Facebook page, he advised Muslims to celebrate at home to prevent the spread of Covid-19.

“His Royal Highness is still saddened because the Muslim festival, which should be celebrated with the spirit of unity of the ummah to strengthen the friendship, had to be held in a limited and vigilant manner.

“Sultan Sharafuddin hopes that (this year’s) Aidiladha would be celebrated in a moderate scale and every activity involving sacrificial slaughter would be carried out in accordance with the standard operating procedure (SOP) set by the Selangor Islamic Religious Department,” it said.

The Sultan called on Malay Muslims to strengthen unity and not argue about trivial issues. — Bernama 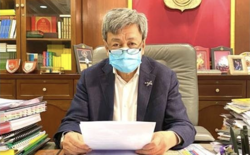