‘It does not cost much to be kind’

JOHOR BARU: For close to three years now, Tan Pen Bok has allocated at least three hours a day to feed the stray cats in his neighbourhood.

The retired technician said he would leave his house between 2pm and 4pm daily to look for food for the cats.

“I fish out leftovers from rubbish bins at the shops near my house.

“Sometimes, restaurant owners will give me their leftovers to feed the cats,” said Tan, 67, during an interview at his house in Taman Perling.

He said that he would sort through the food and only keep what is suitable.

“I bring two plastic bags or containers when I go out. One for the leftovers I find that day and another with food sorted out the night before for the cats.

“After I find and collect enough leftovers, I will feed the cats,” he said. 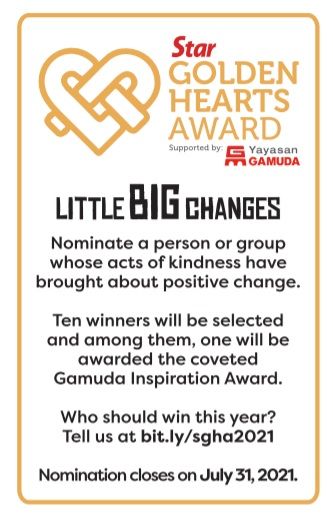 Tan said he normally gets home late in the evening after feeding the cats, but once home, he will sort through the food he has found and keep it in the fridge to be given to the cats the next day.

“I started this routine at the end of 2018. I don’t want these homeless cats to go hungry. I will go out to feed them every day, come rain or shine.

“Even on days when I have an appointment with the doctor, I will make sure I get home before 4pm so that I can continue the routine,” he said.

Tan goes for regular check-ups to monitor his heart.

He only has his savings and income from his wife’s small toy business at the market (which has closed due to the movement control order) to survive on.

“Sometimes, I use my own money to buy cat food when leftovers are scarce.

“I will buy about RM10 to RM15 worth of fish almost daily for our consumption, as well as for the cats.

“My wife and I do not need much money to live on. We lead a very simple life,” he added.

Tan said that sometimes strangers would give him food or money for the cats – presently numbering around 50 – as they have seen him feeding them.

Apart from this, he also buries the dead cats he finds in the area.

“It breaks my heart to see them rotting in the middle of nowhere.

“I bury them in front of my house after saying a prayer,” he said, adding that he has buried 11 cats so far.

Tan said that as long as he is healthy, he will continue caring for the cats.

“My worry is that someday, if I’m sick, these cats will no longer have anyone to care for them.

“I hope that people will help the homeless animals. It does not cost much to be kind to another living being,” he added.