ALOR GAJAH (Bernama): The Melaka government has ordered all industrial sector employers who placed their foreign workers in residential housing areas to move them to designated hostels.

He said the move involving foreign workers would be implemented soon to curb the spread of Covid-19 following a spike in clusters and cases involving industries.

"We are taking the measure so that they do no mingle with the local community in housing areas," said Sulaiman.

He added that complaints from local communities had been received, saying that they had raised their fears about the increasing number of cases among foreign workers who are working in factories but living in residential housing areas.

Sulaiman said this when speaking to reporters after the Kuala Linggi state constituency Outreach Vaccination Programme here on Thursday (July 15).

Sulaiman said as an example, there are more than 3,000 foreign workers in the Ayer Keroh area and added that they have been ordered to move to the identified locations.

Among the locations identified are the building near Melaka Sentral which can accommodate 1,400 people apart from the Chief Minister Incorporated building which is vacant.

"This is seen as the best approach to separate foreign workers from the local community now and if the employers are defiant, firm actions can be taken under the Prevention and Control of Infectious Diseases Act (Act 342),” he said. 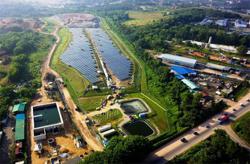