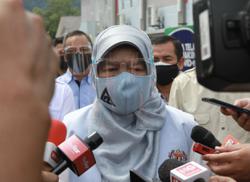 He said Section 107(2) of the Local Government Act 1976 (Act 171) did not elaborate on the power of these authorities to issue a closure order on factories.

Although Section 107 (2) was referred to as giving absolute power to local authorities to revoke the factory's operating licence, Ng said the revocation must be done in accordance with the conditions and parameters stated in the licence at the time it was issued, rather than arbitrarily or without basis

"The factory operating licence issued by the local authority is only subject to Act 171 It does not include health issues relating to the prevention and control of infectious disease because such matters are subject to health law enforced by the federal government through the Prevention and Control of Infectious Diseases Act 1988 (Act 342),” he said in a statement.

Ng had issued the statement on Wednesday (July 14) in response to the demand for local authorities to issue a closure order on factories following the surge of Covid-19 in Selangor.

Ng also said that even though Health Minister Datuk Seri Dr Adham Baba and Minister in the Prime Minister’s Department (Parliament and Law) Datuk Seri Takiyuddin Hassan have amended Section 2(1) of the Emergency (Prevention and Control of Infectious Diseases) (Amendment) Ordinance 2021 on March 3, it did not mean that local authorities have the power to order the closure of the factories.

"The amendment was made to enable environmental health officers to help ensure compliance of the SOP and federal government’s instructions,” he said.

In conclusion, he said the PBT in Selangor have been carrying out their duties transparently and responsibly in accordance with the parameters of the law as well as the doctrine of "rule of law” and "fair and equitable treatment” as stated in Act 342. - Bernama