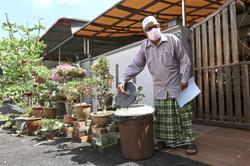 WOKEN up by his dog’s barking, a man from Butterworth, Penang, was startled to find a man rummaging through a rubbish bin to scavenge for food, Sin Chew Daily reported.

Known as AK Ang on Facebook, the man uploaded a video of the incident online showing a man dressed in a football jersey going through one of his neighbour’s bins after midnight and picking up discarded leftover food.

He said the man could have chosen to break into one of the houses in the neighbourhood for money but instead chose to scavenge for food.

“He chose to do it in the middle of the night perhaps because he was embarrassed,” Ang said.

Moved by the man’s plight, Ang went out of his house, approached the man and gave him some money.

Ang’s actions received praise online, with many Internet users commenting that Malaysians should be helping each other during such a challenging time.

The 39-year-old revealed the ordeal she went through in an interview with the daily while blaming herself for allowing it to happen.

“I feel it’s because I’m fat and did not manage my blood sugar level properly. I’m the one who harmed the baby,” said Lim, who is from Penang.

Lim, who often livestreams herself eating, has promised to cut down on it.

“I don’t want to jeopardise my health just to attract more views,” she added.

Lim, who is known by fans as “Miau Miau”, is a well-known plus-sized actress in the country.

She announced last November that she was dating a Chinese national.