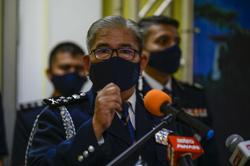 JOHOR BARU: Some 23 protected birds of various species have been seized by the Wildlife and National Parks Department (Perhilitan) in a raid here.

State Perhilitan director Salman Saaban said based on information, four enforcement officers carried out an inspection on a house at Taman Bestari Utama in Ulu Tiram at around 10.30pm on Thursday (June 24).

“We found 11 long-tailed parakeets (burung bayan nuri), one blue-rumped parrot (burung bayan puling), one white-rumped shama (burung murai batu) and 10 blue-crowned hanging parrots (burung bayan serindit) in the house, all of which are protected under the Wildlife Conservation Act 2010 (Act 716).

“We found that the suspect does not possess any valid licence from the department to keep those birds,” he said in a statement on Friday (June 25).

He said the case is being investigated under Sections 60 and 68 of the Wildlife Conservation Act 2010 (Act 716) for hunting or keeping protected wildlife without a valid permit or licence.

“We have also lodged a report at the Ulu Tiram police station and seized the birds, along with a phone, for further investigation.

"The estimated value of the seizure is about RM9,500,” he said, adding that the 47-year-old suspect has been released on police bail.