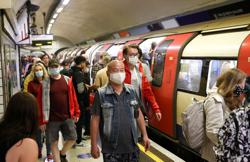 Uggah (second from right) talking to a senior citizen awaiting her turn to be vaccinated at the Spaoh community hall.

The Deputy Chief Minister said the state had requested 650,000 doses of the single-dose vaccine from the Federal Government.

"The CanSino vaccine is suitable for our people living in the interior, like the Penans.

"Our medical teams will only need to visit them once to vaccinate them, thus cutting down on logistics, transportation and other costs," he said after visiting the Covid-19 vaccination centre at the Spaoh community hall in Betong division, about 270km from here, on Wednesday (June 23).

The CanSino vaccine was given conditional approval for emergency use in Malaysia by the Drug Control Authority on June 15, along with the Johnson & Johnson vaccine which also requires one dose only.

However, Uggah noted that medical teams recently visited a number of interior longhouses and villages in Miri and Kapit divisions to inoculate the people there with the Sinovac vaccine.

"We had to do this due to outbreaks in these locations, which warranted our immediate response.

"As always, our priority is to save lives," he said.

Uggah also said a total of 54,746 shots were administered statewide on Tuesday (June 23).

To date, he said, 910,595 people in the state had received either the first or both doses.

"I would like to express our deep appreciation and gratitude for all the frontliners and those involved.

"Some have to work double shifts in what is the biggest health operation in the history of the nation," he said.

On the progress of vaccinations in Betong, Uggah said 35,312 people in the division had received the first dose and 7,236 had completed both doses.

Based on the current pace, he added, Betong would be able to complete the vaccination programme by the end of next month.