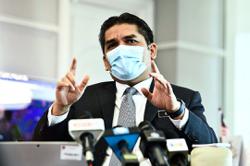 EDUCATIONIST group United Chinese Schools Association of Selangor and Kuala Lumpur has urged the government to extend the recruitment drive of graduates for teaching positions to include those from private universities as well, reported Sin Chew Daily.

The Education Ministry, said the group should not limit the intake to only public university graduates.

“The ministry should give priority to graduates with a degree in Education, regardless of whether they are from public or private universities.

“After that, open the recruitment to graduates from other courses. This will encourage our young to take up the role of educators, ” said its president Cai Qing Wen.

Education Minister Datuk Dr Mohd Radzi Jidin had earlier announced that there would be a “one-off” admission of 18, 000 Grade DG41 teachers this year to address the perennial shortage of staff.

He had said that Selangor, Johor, Sabah and Sarawak were the four states that urgently needed new teachers, adding that those hired in this intake were expected to be posted to their schools by October.

Cai, however, said that although the intake would address the current shortage, there needed to be a long-term plan to cultivate the next generation of teachers.

“Cherish this opportunity and fight to become a qualified teacher. Not only is the success yours, you will also be bringing benefits to society, ” he urged young Malaysian-Chinese.

> The Chinese daily also reported that Malaysian singer Fish Leong recently celebrated her 43rd birthday by donating T$90, 000 (RM13, 372) in her son’s name for the purchase of personal protective equipment (PPE) for frontliners.

“I will not be celebrating my birthday this year. There is nothing worth celebrating.

“We should instead channel the energy and hopes from our birthday to the world, ” the Taiwan-based Leong wrote in her social media post on her birthday, which fell on June 16.

On Monday, she announced that she had donated T$90, 000 after finding out about the fundraising campaign to purchase PPE by Howard Chiang, a prominent manager in the music industry.

Leong, who is known as the Queen of Love Ballads, urged the public to also chip in.

Her efforts were well received by fans, with many praising her kindness.