BALIK PULAU: A man has been remanded for five days until Thursday (June 27) for allegedly giving his baby an alcoholic drink.

The remand order against the 19-year-old suspect was issued by Magistrate Khalijah Mohd Khalid at the Balik Pulau Magistrate's Court to assist in the investigation under Section 31 (1) (a) of the Child Act 2001.

The suspect, wearing a black and white shirt, arrived at the court in handcuffs at about 8.30am on Wednesday (June 23) escorted by policemen.

He was detained shortly after police launched an investigation based on a report lodged against him on Tuesday (June 22).

A 30-second video that went viral on Tuesday shows the man holding the baby and feeding it from a can bearing the label of an alcoholic beverage.

It is unclear if the baby was actually given alcohol by the man, who was seen smiling when the toddler grabbed his hand with the can.

According to police, the suspect has a record of 14 prior crimes and is under police surveillance in Teluk Bahang. 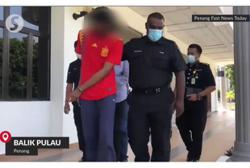