The latest deaths were three women aged 67 to 87 and four men aged 59 to 86, the state disaster management committee said in a statement.

All had various comorbidities including hypertension, diabetes, stroke and chronic kidney disease.

Another 27 districts recorded between one and 42 cases each.

"A total of 108 individuals have been screened and 40 tested positive while 68 are waiting for results," the committee said.

In Telang Usan, the Lunyim cluster involved Long Lunyim and Long Tepen villages which had been placed under the enhanced MCO.

The cluster currently has 21 confirmed cases out of 63 individuals screened.

The committee added that the Kampung Boyan, Kenyalang Park and Akademi Samariang clusters, all in Kuching, were declared to have ended, leaving 97 active clusters in the state.

It also announced that an enhanced MCO would be enforced at two longhouses in Tatau and Bintulu as well as the workers' quarters of a plantation in Bintulu from June 21 to July 4. 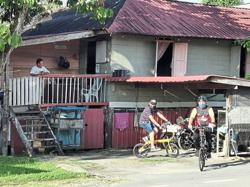