Shah Alam OCPD Asst Comm Baharudin Mat Taib said that the raid was conducted at 1am on Monday (June 21) at an apartment in i-City.

"Eight people were arrested, including two 15-year-old girls who are still in Form 3. The suspects were aged from 15 to 23.

"All were issued compound notices and were brought to the Shah Alam police station for urine tests. Seven tested positive for drugs," he said in a statement on Monday.

He added that the seven were remanded at the Shah Alam court. 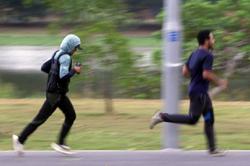