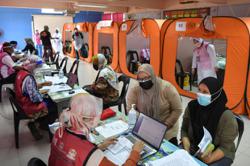 PETALING JAYA: As the fight against Covid-19 continues, health experts have suggested that testing be ramped up.

Galen Centre for Health and Social Policy CEO Azrul Mohd Khalib said he felt that Malaysia had not fully utilised its testing capacity.

He said the high positivity rate of about 7% was an indication that not enough of the population was being tested.

“That rate should be below 5%.

“Increased testing will allow more people to be screened and they can be diagnosed and treated earlier,” he added.

“We fail to appreciate the localised nature of cluster and superspreader events.

“And a large majority of infections are sporadic cases, which may not lead to a cluster but could lead to deaths.”

He said that the rate of patients being brought in dead showed there were flaws in early detection mechanisms.

“Waiting for cases to pop up is not a strategy to break the chain of infections. It should be in line with WHO’s Find, Test, Trace, Isolate and Support (FTTIS) system,” he said.