PETALING JAYA: Police here have rescued two male Indian nationals believed to be victims of human trafficking and exploitation from a restaurant here.

Petaling Jaya OCPD Asst Comm Mohamad Fakhrudin Abdul Hamid said the rescue was made after a video clip from a TV programme in India went viral on social media recently.

"We translated the content and learnt it was of a male Indian national talking about his experience working at a restaurant in Petaling Jaya. He claimed he was exploited by not being paid and was beaten as well as sexually abused," said ACP Mohamad Fakhrudin.

He added that the man also claimed that he witnessed the restaurant owner burning another Indian national's leg.

ACP Mohamad Fakhrudin said at a press conference at the Petaling Jaya police headquarters on Sunday (June 20) that a restaurant here was inspected by police along with officers from relevant agencies.

He said that the inspection revealed that the restaurant employed six local workers and an Indian national.

He said a local man – a former restaurant supervisor – was also detained during the operation on Thursday (June 17).

"Upon questioning, the Indian national confirmed that his colleague suffered burns in the middle of last year. A woman also lodged a police report over the same video on Friday," said ACP Mohamad Fakhrudin.

He said that the police rescued two male Indian nationals and that one was still working at the restaurant while the other was not.

ACP Mohamad Fakhrudin said that the two victims have been placed under protective custody under an interim protection order for 21 days while the suspect has been remanded until June 24.

He added that the suspect is a 33-year-old man who has a prior criminal record, including for drug-related crimes. 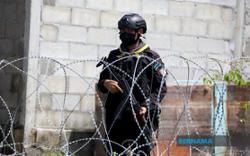