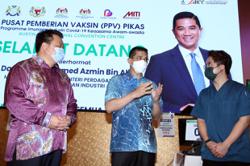 Checking in: Azmin (centre) observing a health professional vaccinating a Petronas employee during a visit to the industrial PPV at the Refinery and Petrochemical Integrated Development in Pengerang in Kota Tinggi. Looking on is Petronas president and group chief executive officer Tengku Muhammad Taufik. — Bernama

JOHOR BARU: In the two days since the Public-Private Partnership Covid-19 Industry Immunisation Programme (Pikas) kicked off, over 2,000 companies have signed on to it, says International Trade and Industry Minister Datuk Seri Azmin Ali.

So far, 2,082 companies with a workforce of 301,050 across the country had registered under Pikas, he said.

Azmin added that in Johor alone, 255 companies with 14,357 employees had registered for the programme, which was launched on Wednesday under Phase Four of the National Covid-19 Immunisation Programme.

Azmin noted that companies that wished to take the second option would have to fulfil the criteria outlined by the Health Ministry.

“There are also companies carrying out on-site vaccination that are prepared to include smaller neighbouring factories around them.

“Companies are also offering to assist in vaccinating their vendors’ employees who have been providing supporting services to them,” he told a press conference after visiting a PPV under Pikas at Austin International Convention Centre (AICC) here yesterday.

He added that the commitment from companies would be crucial to the country’s success in vaccinating its population by the end of the year.

There are two PPV under Pikas in Johor; the one in Pengerang conducts the on-site model while the one at AICC carries out the first model.

Azmin said the PPV at AICC was expected to start administering the vaccine by June 28 while the on-site PPV in Pengerang started operating on June 16.

Earlier, he also visited the PPV in Pengerang in Kota Tinggi.

On a separate matter, Azmin denied claims by certain groups that the government had failed to control the spread of Covid-19 in the country, adding that the efforts taken by it through the year had started to show positive results. 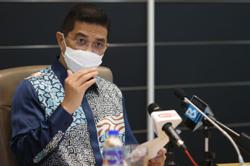