IPOH: A woman was killed after an accident between a lorry and a car at Ipoh-Lumut road on Saturday (June 19).

According to Fire and Rescue Department Zone 1 leader Nor Rasidamayati Abd Rasid, the victim has been identified as 26-year-old Noor Aishah Mohd Tahir.

“We had difficulties retrieving the body, as the car was under the 24-tonne lorry. However, with the assistance of crane, we were able to retrieve it and the whole operation took about four hours.

“Upon arriving at the scene, the lorry driver was nowhere to be seen and is believed he has fled from the scene,” she said, while adding that the department had received the distress call at 10.28am.

Nor Rasidayamati added the victim was staying at Sungai Siput.

“It is believed that she was on her way to Batu Gajah, while the lorry was heading to Meru, ” she said.

Ipoh OCPD Asst Comm Yahaya Hassan said police had later managed to track down the lorry driver and he has been remanded for further investigations.

“Our initial investigations revealed that the lorry driver was heading to Sungai Siput. He lost control of the vehicle before hitting the car that was from Jalan Chemor heading to Jelapang.

“The car driver, 26, suffered from severe injuries and has been brought to the Raja Permaisuri Bainun Hospital for a post mortem scheduled on Sunday (June 20), ” he said.

“The lorry had broken headlights, dented front fenders and bent tires, ” he added.

ACP Yahaya said the was being investigated under Section 41(1) of the Road Transport Act 1987 for causing death by driving recklessly. 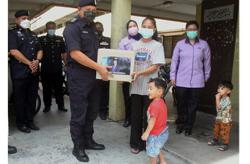