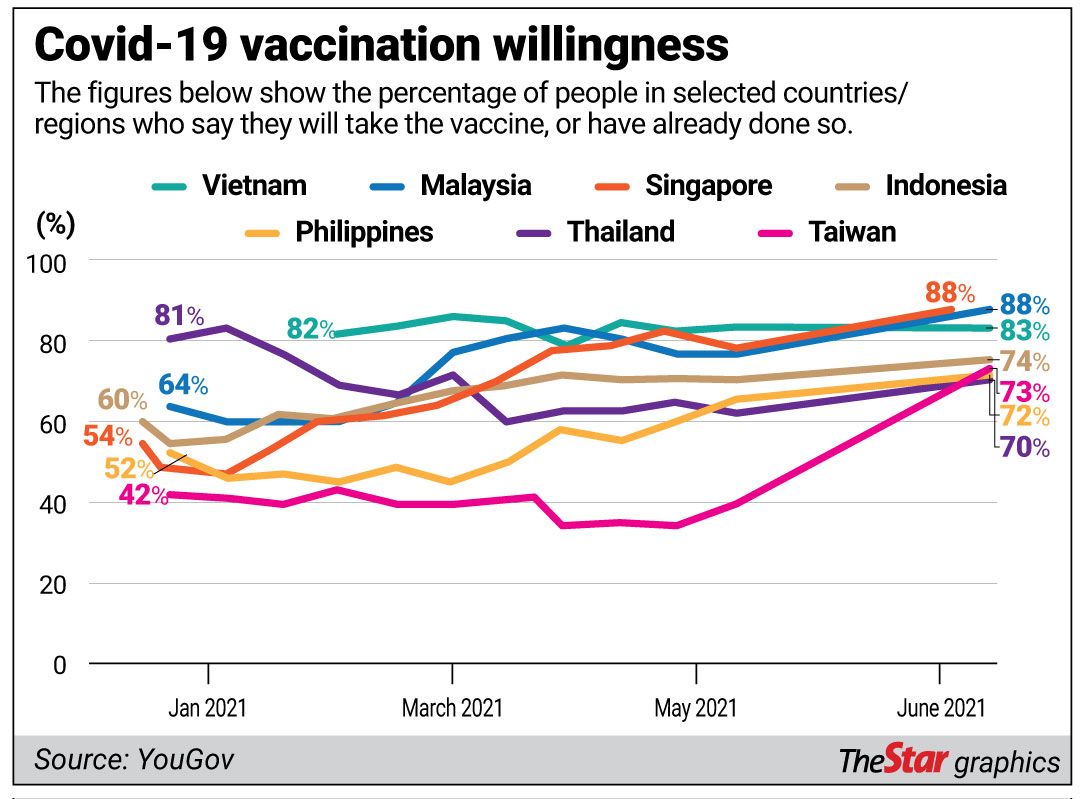 PETALING JAYA: People in a number of countries in the Asia-Pacific region have recently shown more willingness in receiving the Covid-19 vaccine compared to the end of last year, according to a YouGov survey.

As of early June, out of the 11 countries and regions in Asia polled on YouGov, Malaysia and Singapore had the highest “vaccine willingness” at 88%, followed by Vietnam and India at 83% and 81% respectively.

Despite the encouraging response, supply shortage is a major factor in the region’s slow vaccination rate, with slightly more than 20 doses administered per 100 people in the region, according to a CNBC report.

A professor at the University of Hong Kong’s School of Public Health, Benjamin Cowling, in an interview with CNBC, said many Asian governments had problems securing a supply of vaccines, and the initial success at containing the Covid-19 in the region may have caused people to view vaccination with less urgency.

However, Malaysia’s vaccination rates have seen major improvements with more than 200, 000 doses administered per day since June 15, while registrations have ramped up, with a significant 710, 477 sign-ups recorded in a single day on June 11, compared to slightly over 200, 000 registrations the day before.

As at June 17, the states with the largest percentage of vaccine sign-ups were Putrajaya with 100% of the targeted population registering for the National Covid-19 Immunisation Programme, followed by Kuala Lumpur (97.96%), Selangor (75.37%) and Labuan (73.2%).

Vaccine hesitancy, however, has seen a sharp rise in Thailand, with YouGov’s polls showing that only 70% are willing to take up the vaccine in June 2021 compared to 81% in December 2020. This is lower than in Indonesia and the Philippines at 74% and 72% respectively.

Thailand, which started its vaccination drive on June 7, has reported widespread dissatisfaction with the military-backed government’s vaccine strategy, made worse by delays in getting vaccines coupled with the public’s concerns about side effects and low efficacy rates of certain vaccines.

Hong Kong also had a very low vaccine take-up, with YouGov’s poll showing vaccine willingness at below 40% between late December 2020 and May 2021 as the country faced issues of distrust of the government, online misinformation, and a lack of urgency.

A government vaccine task force member has warned that Hong Kongers “only have a three-month window” before the city’s first batch of the Pfizer-BioNTech vaccine reaches its expiry date.

However, in June, the poll revealed Hong Kongers showing improved willingness to the vaccine at 50% as businesses offered various incentives for people to get vaccinated – from lucky draw offering property and cash prizes to staycation savings.

In more advanced countries like the United States, experts are concerned that recent vaccination rates, which have dropped to fewer than one million shots per day, will cause a surge in Covid-19 cases during summer.

Many states in the American northeast have administered at least one vaccine dose to 70% of their adult population, a benchmark set by President Joe Biden

for the nation to reach by July 4, but in the south, the target is still far off.

Among the reasons are the declining sense of urgency and the reduced demand for the Johnson & Johnson one-dose Covid-19 vaccine, with close to half of the 21 million doses produced for the United States remaining unused.

The US government has declared June a “National Month of Action” to persuade more people to get their vaccines ahead of July 4, the nation’s Independence Day.

Vaccine incentives are being offered across states, ranging from million-dollar lotteries to free beer and guns to encourage those on the fence to get inoculated.

In the United Kingdom, new research by ORB International and Vaccine Confidence Project revealed that more young adults are willing to take up the vaccine, with confidence rising by 17% and 27% for men and women under 45 respectively.

The National Health Service (NHS) has also said that there is a marked increase in the number of Christians and Muslims who intend to book a vaccine appointment, and vaccine take-up tripled among Black British and Asian communities between February and April.

Efforts to tackle vaccine hesitancy in the country include engaging faith leaders in their local communities, setting up pop-up clinics at sports venue and places of worship and garnering celebrity support for NHS campaigns. 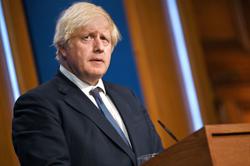