KUANTAN (Bernama): About 7,000 hens perished in a fire at a chicken breeding centre owned by LKPP Goldkist at Batu 8, Jalan Kuantan-Segamat here on Saturday (June 19) morning.

Company employee Mohd Afendi Kamarulzaman, 33, said the fire was noticed by security guards on duty around 6am and involved one of the 24 chicken coops there.

"The firefighters who arrived at the location at 6.30am managed to save 3,000 chickens in the coop involved and managed to control the fire from spreading to other coops," he said when contacted, here, today.

Mohd Afendi said the fire is understood to be the second such incident since the centre commenced operations 20 years ago but the previous fire only involved empty coops.

The fire was brought under control in less than half an hour. The cause of the fire is still under investigation. - Bernama 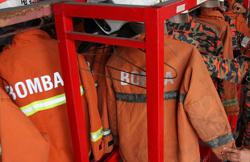