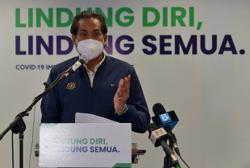 Shots taken: Newly-vaccinated individuals posing together for a photo at a vaccination centre in Kampung Paya Besar, Maran. — Bernama

Kasemai, 68, said although she and her brothers Ongcong, 55 and Fahizul, 40, and sisters Mariana, 46, and Norhayati, 41, lived separately, they were able to gather at the vaccine administering centre

(PPV) to get vaccinated under the National Covid-19 Immunisation Programme.

“At first, I was scared after looking at the rather big needle on TV but in reality it was much smaller. I was also worried about my string of illnesses but the health authorities advised me to bring along my medical record card for their reference at the vaccination centre. Luckily, I could be vaccinated,” she said yesterday.

Norhayati made sure to take photos of the vaccination process.

“I will share these photos in my WhatsApp groups to create awareness and encourage them as there has been a lot of wrong or inaccurate information on Covid-19 vaccination on social media which could influence their thinking,” she said.

Maran MP Datuk Seri Dr Ismail Abd Muttalib said about 1,300 Orang Asli in the constituency had been listed for vaccination in stages, with the first stage starting yesterday.

In Port Dickson, Orang Asli villagers of Bukit Kepong were thankful to the health frontliners for making the long trip to administer the vaccine.

The mobile vaccine programme for 90 residents there is a cooperation between the State Orang Asli Development Department (Jakoa) and Port Dickson district health centre.

Bubot Tahat, 84, who was accompanied by her granddaughter Suzaina Kamil, 34, said the frontliners’ presence could give confidence and encouragement to the other residents who were still sceptical about receiving the vaccine.

“Thank you for coming from far to our village. The injection I received was just like an ant bite,” she said while giving the thumbs-up sign after getting vaccinated.

Suzaina who also received the vaccine, praised her grandma’s spirit as the latter needed not be forced by her family members to get vaccinated but came voluntarily.

Kindergarten teacher Norleela Mohd Kasim, 33, said her family members initially did not want to get vaccinated but after she explained the good points and the need for it, they changed their minds and agreed to receive the vaccine.

Orang Asli village chief Omar Goming, 64, said besides not having to travel out for vaccination, the residents could also get accurate information on the vaccine from the health frontliners through the mobile vaccination programme,

Negri Sembilan and Melaka Jakoa director, Shahrani Idderis said a total of 8,167 Orang Asli from 69 villages in the state were eligible to receive the vaccine. — Bernama 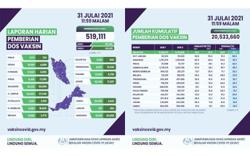