Cops to probe report of abuse at police station

PETALING JAYA: Police have opened an internal inquiry into allegations by a man that he was beaten up by cops while having his statement recorded on June 9 over a domestic abuse case.

Selangor police chief Comm Datuk Arjunaidi Mohamed (pic) said the investigation will be handled by the state Criminal Investigations Department following a report lodged by the man on June 11.

Comm Arjunaidi's statement came in the wake of an article by a news portal in which the man alleged that he had been beaten by seven police officers.

However, Comm Arjunaidi disputed the events retold by the man in the news article.

"The man was present at the Serdang district police headquarters to record his statement following a report lodged by his wife over a domestic abuse case.

"However when he saw his wife at the station, he became aggressive and threatened to kill her.

"Despite warnings by the police, the man refused to calm down and shouted derogatory words such as 'Polis bodoh', while remaining aggressive.

"During his arrest, a scuffle ensued and the police were forced to use force but it was minimum," he said.

"Checks showed that the man has eight prior police records for extortion and narcotics related offences," he said.

In the report, former workshop manager Joseph Prakash Sukumaran claimed that he could not breathe and was unconscious after the policemen started hitting him, and that he later vomited blood when he was in the lock-up.

Joseph, who was charged at the Petaling Jaya Magistrate's Court on June 11 with four counts, including obstructing a public servant with the discharge of his duty and disorderly conduct, claimed that a medical check-up at the Tengku Ampuan Rahimah Hospital showed that he sustained soft tissue injury to his neck, chest, limbs and face. 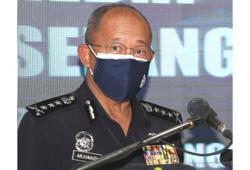