A MAN whose father-in-law’s remains were buried with the help of a team of volunteers after he died due to kidney problems, is now paying it forward by offering the same service to the families of Covid-19 victims, Harian Metro reported.

Shahrol Mohamad, 40, has teamed up with Mohd Firdaus Abd Hamid, 37, a former gravedigger, to help bury Covid-19 victims and giving them dignified last rites, asking for nothing in return.

Since starting their service in October, the two have handled a few dozen burials involving Covid-19 fatalities.

“I want to express my gratitude to the frontliners who have been working so selflessly all this while in handling the deceased,” said Shahrol, whose Sentuhan Setia Kasih NGO is based in Kampung Medan, Petaling Jaya.

Running the NGO with his own savings and donations from friends, Shahrol said each body was handled with utmost care and respect under the watchful eyes of health officers.

“We are in full PPE (protective personal equipment) throughout the burial process.

“We also perform the talkin recital after the burial,” he said, adding that they would perform a thorough sanitisation before leaving the grave.

> Berita Harian reported that a woman who gave birth last Friday had a shock when she realised her baby boy was accidentally swapped with another.

Siti Suriani Wahiddin said she and her husband noticed the error after arriving home from a private hospital on Saturday.

“My husband wanted to take off the name tag from our baby’s foot when he took a glance and read it.

“The mother’s name written on the tag was of another woman, named Dianah.

“This is no drama but reality. It is happening to me,” Siti Suriani said in a livestream on her business Facebook page while the couple were on their way to the hospital to sort out the matter.

She later said that the hospital confirmed that her baby had been accidentally swapped.

She was thankful that her baby was still at the hospital as Dianah had yet to be discharged.

There have been no further updates from Siti Suriani since her last video, which was viewed more than 1.3 million times and shared over 37,000 times, with tens of thousands of comments and reactions. 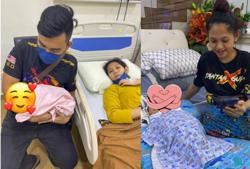