PETALING JAYA: Two policewomen - L/Kpl Noor Fatihah Azelam and Kpl Perakson Anak Jenny - have been hailed as heroes for helping a woman to give birth in a car near a roadblock along the Kuching-Samarahan Expressway.

The incident took place at about 11.50pm on Thursday (June 10) when a husband and wife from Kampung Semera Ulu, Asajaya, were on their way to the hospital.

"Her husband was in panic mode and quickly made a U-turn to ask for our help when he saw a roadblock, ” said L/Kpl Noor Fatihah when contacted by mStar.

"At first, the male officers went to check and informed us that there was a woman in labour. When I rushed over, I could hear the sound of a baby crying," she said.

L/Kpl Noor Fatihah said both she and Kpl Perakson stepped in to help when the pregnant woman had some complications due to problems with the umbilical cord.

"The umbilical cord got stuck due to the baby's neck. We also faced trouble cutting the cord as there was no proper equipment. "Alhamdullilah, everything went smoothly. We contacted an ambulance before the paramedics rushed them to the Sarawak General Hospital," she said.

L/Kpl Noor Fatihah said the incident was her first such experience and that they did their best to help the mother.

"I was quite shocked at first. But she really needed our help so I was pushed to be versatile. There were no other female officers aside from us," she said. 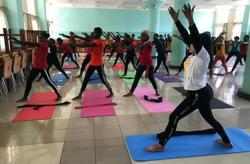