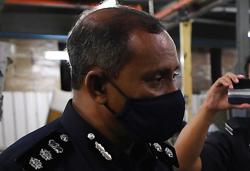 KUANTAN: The Kuantan district police headquarters will not compromise if any of its own personnel are found to violate the Covid-19 standard operating procedures (SOP), says Asst Comm Mohamad Noor Yusof Ali.

The Kuantan OCPD said this in response to a post on Facebook allegedly showing non-compliance by police personnel.

A woman had posted a picture of three uniformed police personnel members allegedly taken at a police station after she herself was fined RM5,000 for not practising physical distancing.

One of the police personnel was shown to have her face mask down while two others were sitting close together in the picture.

The woman claimed that a colleague had taken the photo when they were at the police station and questioned why it was acceptable for the police personnel not to observe the SOP.

ACP Mohamad Noor said they were police volunteer reserve personnel who failed to comply with the SOP by not wearing a face mask properly and not observing physical distancing while on duty.

"In regards to this, the police will not compromise and will enforce the rules and regulations of the Covid-19 SOPs as set by the government.

"Stern action will be taken against any police officer, personnel and volunteer who violate the rules," he said.

ACP Mohamad Noor said individuals who fail to observe physical distancing and wear a face mask correctly during the enhanced movement control order period in Kuantan could face a fine of RM5,000 while companies could be fined RM25,000. 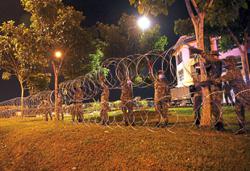