Kelantan Council of Islamic Religious and Malay Customs (MAIK) president Tengku Tan Sri Mohamad Rizam Tengku Abdul Aziz said His Royal Highness had agreed that the allocation of RM1 million provided by MAIK for the programmes with him during the month of Ramadan be channelled to the asnaf.

"His Royal Highness really hopes that the contribution will bring joy to the asnaf, orphans, tahfiz students and the needy," he said in a statement on Thursday (June 3).

Tengku Mohamad Rizam, who is also the Tengku Temenggong of Kelantan, said the Sultan expressed concern with the current development of Covid-19 pandemic in Kelantan.

"His Royal Highness also called on the people to continue to discipline themselves and adhere to the guidelines set by the federal and state governments in order to flatten the Covid-19 infection curve and at the same time to stop new clusters from emerging in Kelantan," he added. - Bernama 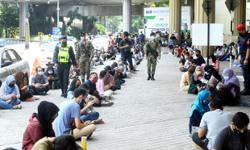