Johor Customs director Sazali Mohamad (pic) said the seizures were made in the course of three raids.

In the first case, the department raided a business premises along Jalan Kebun Teh that had been turned into a storage facility for imported cars without Customs approval at around 3pm on May 25.

“Checks at the premises led the department to seize three multipurpose vehicles (MPVs) worth RM220,000 with duty and tax valued at RM424,930, ” he said here on Friday (June 4).

In the second operation, Sazali said the department seized two more MPVs at a business premises along the Pasir Gudang highway at around 1.30pm on May 27.

He added that the seizures were made after investigations found the vehicles had been transferred out of a Customs warehouse without approval.

In the third operation, the department seized an imported used car found parked along the roadside of a residential area within Taman Indahpura in Kulai at around 5.30pm on May 31.

Checks on the vehicle from a neighbouring country found it did not have any legal permit. Its estimated value was RM40,000 with duty and tax amounting to RM77,260.

“During the operation, we also detained two suspects aged 23 and 42, and are also tracking down the owner of the car seized in Kulai to assist with the investigations, ” he said.

In an unrelated case, Sazali said the department detained four trailers for attempting to export scrap metals worth more than RM292,000 at the Sultan Abu Bakar Complex near the Second Link.

He said the incident occurred at 11.15pm on May 31 when the trailer operators declared the trade items as “aluminium flakes” at the complex.

“Checks found that the trade items and their tariff code were different from what was declared in the Customs forms.

“The estimated value for the scrap metal and vehicles is RM692,096, ” he said, adding that five male suspects between the ages of 29 and 43 years have been detained to assist with the investigation. 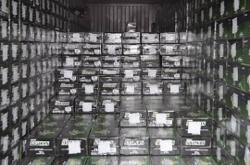