Detainee who died in custody tried to escape before falling to his death, say Selangor cops SHAH ALAM: Police have confirmed that the detainee who died in custody at South Klang police headquarters had tried to escape before he fell from the second to the first floor.

Selangor police chief Comm Datuk Arjunaidi Mohamed (pic) said the incident occurred at about 1.50pm on Thursday (June 3) when the investigating officer was bringing Umar Faruq Abdullah, 36, to the lockup after recording his statement.

"The detainee pushed the officer before falling from a nearby open window. He fell from the second floor to the first floor, ”said Comm Arjunaidi

"He suffered severe injuries to his head and face. We are waiting for the post-mortem results to ascertain the cause of death," he added at a press conference at the state police headquarters on Friday (June 4).

Umar Faruq was detained on June 2 for allegedly stealing gas cylinders, he said.

"He has eight past criminal records. He was detained and remanded until June 6 to assist the investigation," he added.

Comm Arjunaidi said that the investigation into his death is being conducted by the Selangor police headquarters.

"We are investigating the incident under Section 223 of the Penal Code and sudden death report (SDR).

"Selangor CID has investigated the crime scene. Our primary focus is whether there was a breach in police standard operating procedure (SOP), negligence and duty of care on the part of the investigating officer, who is a sergeant.

"The investigating officer has been transferred with immediate effect while waiting for the results of the investigation.

"We will take further action depending on the investigation," he added.

Asked about several custodial deaths recently in Selangor, Comm Arjunaidi said police have taken the necessary action to prevent such incidents from occurring in the future.

"If it still happens, we will investigate thoroughly," he added.

On criticism by certain NGOs against the police for taking action against journalists who covered custodial death cases - including recording their statements - Comm Arjunaidi said that the police are only following the law, which ensures justice for all parties.

"If there is a party who lodged a report against the reporters, we have to investigate. It is similar if the reporters themselves lodge a report.

"We have to act in accordance with the law. When we investigate, we have to record the statements of those involved," he said, adding that police were not targeting media practitioners. 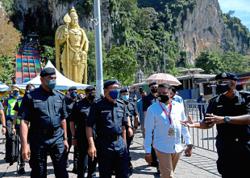