Most putting baby plans on hold until pandemic blows over PETALING JAYA: Many women are choosing to push back their initial plans to have babies as the country goes under another round of movement control order in the fight against Covid-19.

Freelance graphic designer Nur Aishah, 27, who has been married for two years, has decided to postpone her plan of having a baby as she is worried about the current economic situation.

“The economy is doing badly right now, my household income is rather unstable. If the Covid-19 situation continues, jobs might be at risk too.

“I think it is better to put the plan on hold, ” she said, adding that she and her husband will reconsider when the situation improves.

She raised the concern that it is costly to raise a child with many expenses involved.

“It is a stressful time now, I do not wish to add on to the financial burden we currently have, ” she added.

Meanwhile, early childhood educator Wenny Loh, 32, is hesitant about getting a second child due to the change in lifestyle during the pandemic.

“However, at the same time, it is a pity seeing my first child, who is now two years old, unable to go out.

“She cannot learn through exploring the world, ” she said, adding that she does not want her second child to go through the same journey.

She is currently studying the effect of vaccines on pregnant women before she makes a decision on having a baby.

Assistant sales manager Bobo Lim, 34, who has been married for three years, said she put her plan of having a baby on hold for almost a year.

“The initial plan was to prepare for pregnancy in June last year.

“However, my husband and I decided to postpone it as there were limited studies on whether the vaccine is safe for pregnant women and babies last year, ” she said.

As there are more studies being conducted, she now feels safe to resume her plan of having a baby.

“With recent studies stating that Pfizer is safe for pregnant women, we intend to resume the plan.

“Moreover, according to my doctor, it is even better to be vaccinated while pregnant because the baby will have immunity against the Covid-19 from birth, ” she added. 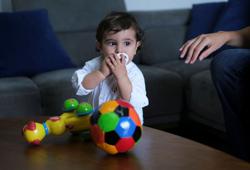