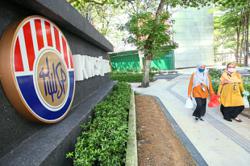 MELAKA: An optometrist is continuing his decade-old charitable work of making accessible free eyeglasses and check-ups for schoolchildren as well as elderly folk despite the tighter movement control order.

Asia Optometric Congress president Datuk Murphy Chan Hian Kee is making arrangements for testing to be done as he can’t stop midway after many parents from the lower income group approached him for help over the past few months.

“Eye check-up sessions will be continued by observing the standard operating procedure and on a one-by-one basis, ” he said in an interview here yesterday.

Appointments for eye check-ups will be made on the phone and deserving cases would be referred to any three of his Eyecon Group Network outlets here, he said.

He was responding to parents who were concerned that the longtime “Gift of Vision” programme will be halted due to the tighter MCO 3.0.

The free spectacles initiative that was started by Chan in 2010 has benefited thousands of students and senior citizens in the state.

The centre was opened to address the high incidence of myopia among young Malaysians.

Chan added that myopia or short-sightedness is growing at an alarming rate among schoolchildren mainly due to increased screen time on digital devices.