Groups press on to ensure food waste as minimal as possible

PETALING JAYA: Although the movement control order has not been a piece of cake for food heroes, they are determined to reduce wastage and continue salvaging food to channel these to those in need.

The Lost Food Project, which rescues nutritious food that would otherwise end up in a landfill, was collecting between 80 and 100 tonnes a month from wholesale market operations at the beginning of 2021.

But its general manager Mohd Syazwan Mokhtar said they were now seeing numbers decreasing to around 50 tonnes in April, and expect this to go lower in May.

“This is due to several factors like the weather, business activities as well as the MCO.

“It continues to be a challenging period. We have had to be extremely careful with our operations for the collection and distribution of food under restrictive movements, reaching out to communities in densely- populated areas while ensuring that strict standard operating procedures are practised, ” said Mohd Syazwan.

He said during the MCO, their collection would usually be impacted, especially with the closure of wholesale markets, malls or supermarkets.

“If there were such closures, like the Kuala Lumpur Wholesale Market last week, it means we would lose around one to two tonnes of daily vegetable collection.

“Our other collections are rather ad hoc, involving surplus food donation from manufacturers, suppliers, wholesalers and others, ” he said.

When the group had to halt its wholesale market operations for around three months due to the Covid-19 outbreak there in 2020, it had to rely heavily on its corporate food partners providing dry goods to make up the difference.

Mohd Syazwan said it had been looking at expanding to different models, such as the one in Singapore, where NGOs set up a collection space, including putting up freezers to store vegetables.

“Some communities have set up a small food bank here, mostly for dry goods. This may be a good practice as it allows for more consistency.

“Ideally, we would like the surplus to be collected by the B40 so areas with many B40 families are ideal, and there are many, especially in People’s Housing Projects.

“But it is also about reducing wastage so that as long as there are people willing to take the food, that should already be considered a plus, ” he said, adding that since they started providing fresh vegetables in 2018 to B40 communities, there are always takers.

For Pertubuhan Pemuda GEMA Malaysia, their MYSaveFood Ramadan programme is an effort to reduce food waste in Ramadan bazaars by channelling unsold food from the traders to the needy.

Its deputy president Muhammad Zulhimi Bachok said this year, they rescued about 5,264.5kg of food and drinks from nine Ramadan bazaars in several states, including Selangor, Perak and Kuala Lumpur.

“When we prevent food in Ramadan bazaars from being wasted by channelling edible surplus food to those in need, it will reduce food waste at the landfill while also reducing methane gas production from decomposition, ” he said. 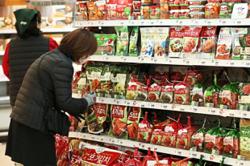