Vaccines must be approved by pharmaceutical regulatory agency before states allowed to purchase it, says KJ

PETALING JAYA: The agreements inked between the Federal Government and Covid-19 vaccine manufacturers stipulate that the companies must first provide the Malaysian Government its order before selling to other parties in the country, says Khairy Jamaluddin.

“However, vaccine suppliers not included in the PICK programme are excluded from this requirement,” he added.

Khairy also said states were allowed to buy their own vaccines, provided they (the vaccines) must first be approved by the National Pharmaceutical Regulatory Agency (NPRA).

“However, the Covid-19 Immunisation Task Force (CITF) takes note that vaccines the states are trying to get, Selangor as an example, are from the same pharmaceutical companies supplying PICK,’’ said Khairy in a statement on Tuesday (May 18).

On the contribution of vaccines, Khairy said CITF welcomed efforts by any outside party who wanted to help PICK or the states by contributing vaccines, but on the condition that the vaccines receive the nod from NPRA.

“Currently, the three vaccines that have received NPRA approval are the Pfizer, Sinovac and AstraZeneca vaccines.

“Nevertheless, after checking with Sinovac in China and Pharmaniaga, which is the licensee for Sinovac vaccine in Malaysia, no application, purchase or official documents (pertaining to the matter) have been submitted by Sekhar Foundation.”

The Sekhar Foundation is linked to businessman and philanthropist Datuk Vinod Sekhar.

Recently, an online news portal reported that the Vinod Sekhar Trust, which is the humanitarian arm of Vinod’s holding company Petra Group, wanted to assist in supplying 200,000 vaccines.

It stated that an official letter was sent to the Health Ministry pertaining to the matter in early March.

Khairy said CITF wanted to clarify that there was no obstruction for the Sekhar Foundation or any other party, to help with vaccine purchase, but it must be done through the right channels.

As for the gap between the first and the second doses of the vaccination, Khairy said CITF and the Covid-19 Vaccine Supply Access Guarantee Special Committee (JKJAV) had taken note of the proposal by several countries to extend the window period in their vaccination exercise.

He added the window period between the first and second doses of the Covid-19 vaccine in Malaysia was fixed based on information sent by the vaccine manufacturers to NPRA.

Khairy, who is also Science, Technology and Innovation Minister, said JKJAV’s expert team under the leadership of Dr Kalaiarasu Peariasamy was also studying the suitability of such a mechanism. 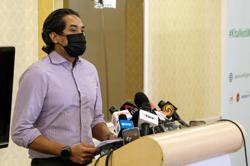