AYER HITAM: Four shops in a row of five in Parit Raja here were destroyed in a fire on Sunday (May 16) night.

Ayer Hitam Fire and Rescue Department operations commander Ahmad Murad Sa’at said on Monday (May 17) that an emergency call was received at 9.43pm.

He said 25 firefighters went to the scene and found four out of the five 45m x 45m shops on fire.

“We managed to stop the fire from spreading to the fifth shop but the other four were about 70% destroyed by the blaze.

“The shops affected were two gadget stores, a shoe shop and a restaurant, ” he said, adding that the fire was extinguished about four hours later. 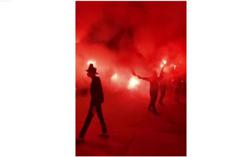