PETALING JAYA: There were no instructions from Umno president Datuk Seri Dr Ahmad Zahid Hamidi for the party’s leadership to invite DAP representatives to their programmes, says Wanita Umno.

Women’s wing chief Datuk Seri Noraini Ahmad said such allegations were defamation by those trying to create distrust in the party.

“This is all slander (sic). I don’t know about the existence of the WhatsApp group.

“Even if it existed, it is not the official WhatsApp group of Umno’s supreme council.

“Perhaps it was created for (defamatory) purposes, ” she said in a statement yesterday.

The chat referred to Noraini seemingly inviting Bangi MP Ong Kian Ming, who is from the DAP, to one of her programmes.

Noraini said that she had bumped into Ong at Universiti Kebangsaan Malaysia’s (UKM) vaccination centre.

“I went there to meet with the MyVAC volunteers who did not return home to celebrate Aidilfitri. It was there that I bumped into Ong.

“Before leaving, Ong asked me where I was going and I told him that I would be visiting a UKM student, who was unwell, near Sungai Merab.

“He told me that he wanted to accompany me because that was in his parliamentary constituency.

“That’s all. This is why I said that the so-called instruction from the Umno president is (defamation), ” she said. 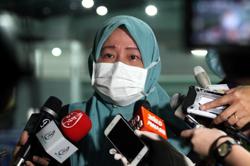