CHUKAI (Bernama): Another Terengganu executive councillor has been compounded RM2,000 for violating the standard operating procedures (SOPs) for Hari Raya Aidilfitri under the movement control order.

Kemaman OCPD Supt Hanyan Ramlan said Hanafiah, who is also Chukai state assemblyman, was found visiting several homes on the first day of Aidilfitri, images of which had gone viral on social media.

"We will not compromise with any party found to be violating the SOPs and will take stern action if any violation is committed, ” he said on Sunday (May 16).

Meanwhile, on his Facebook official account, Hanafiah said he accepted the punishment and have paid the compound.

Hanafiah is the second Terengganu executive councillor to be compounded after Agriculture and Agro-based Industry and Rural Development Committee chairman Dr Azman Ibrahim, who is also Jabi assemblyman, was compounded the same amount for breaching the Aidilfitri SOPs on Friday (May 14).- Bernama 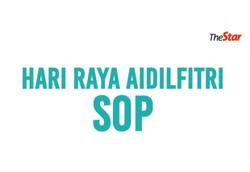