Anifah calls on UN to take decisive action against Israel

KOTA KINABALU: The United Nations Security Council must act "swiftly and decisively" to put a stop to the aggression by Israel on the Palestinians, says former foreign minister Datuk Seri Anifah Aman (pic).

He said the UN Security Council should also demand an immediate stop to any aggression by Israel.

"The international community, especially the UN Security Council must not remain silent and oblivious to the atrocities committed by Israel, he said.

He also called on the Organisation of Islamic Cooperation (OIC) to do its part and put pressure on the relevant parties in ensuring Israel ceased all acts of aggression and terror towards the Palestinians.

"Pressure must include sanctions and necessary bans until the international community acts accordingly towards Israel," he said in a statement here on Sunday (May 16).

Anifah said that the recent air strikes by Israel in Gaza resulted in multiple deaths including women and children, it continues without any action by the international community.

He said that it was appalling that the world had yet to find a solution to end the decades of brutality by the Israeli government against the defenceless Palestinians.

"The Israeli government continues to violate International Law with its heavy-handed approach.

"It is indeed of serious concern that the Israeli government continues to lack accountability and continues to create ridiculous unwarranted justifications as an excuse to continue its reign of terror and inhumane actions against the Palestinians," he said.

Anifah, who is Parti Cinta Sabah president, said that the attacks by Israel against Palestinians civilians and worshippers in Al-Aqsa Mosque as well as forced evictions of Palestinians from their homes were not only a blatant disregard of international law, but also goes against the teachings of the Torah (religious book of the Jewish people).

"I am extremely dismayed by the diminishing prospect of co-existence and the deafening silence of the so-called superpowers of the world," he added. 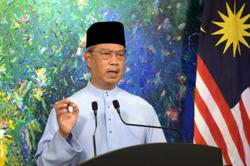