PETALING JAYA: The Terengganu Mentri Besar and his fellow administrators in the 11-member state executive council will be forgoing a month of their pay and donating it to the Palestinians.

“God willing, my fellow state exco members and I have decided to take a one-month pay cut in aid of the Palestinian people who are currently fighting against the Jewish Zionists, ” said Datuk Seri Dr Ahmad Samsuri Mokhtar in a Facebook post yesterday.

“I call on all to join us by showing solidarity within our own means, ” he said.

He accompanied the post with a news article from TV Darul Iman, the state video channel, saying that the aid would be channelled to the #Aid4Palestine fund.

The Mentri Besar said the move had also received support from government backbenchers in Terengganu who had agreed to contribute RM3,000 each towards the fund.

Government-linked companies in the state, too, had so far raised RM100,000 for the cause, Ahmad Samsuri was also quoted as saying.

The move comes in the wake of the incursion and attacks by Israeli forces and settlers against Palestinian civilians and worshippers at Al-Aqsa Mosque on May 7 and continued aggression. 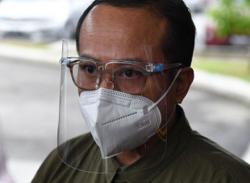