According to a statement uploaded on Istana Negara’s Facebook page, the King and Queen were also saddened by the Olympian’s death and hoped that his family would be patient and strong in facing this difficult moment in the month of Syawal.

"Their Majesties highly appreciate his services, contributions and sacrifices as a national athlete and describe his passing as a huge loss for Malaysian sports.

"Their Majesties also pray for his soul to be blessed by Allah and placed among the righteous, ” the statement read.

Haziq, 27, was pronounced dead at the Kajang Hospital on Friday morning.

According to a family member, Haziq collapsed after performing the Subuh prayer at his house in Kajang.

The recurve archer had brought fame and glory to Malaysia with many of his achievements at the international level and had competed in two Olympic Games -- London 2012 and Rio 2016.

In 2013, Haziq was named Best Young Athlete at the 2012 Sportswriters Association of Malaysia (SAM)-100PLUS award.- Bernama 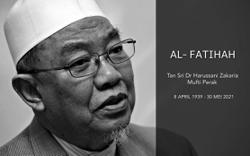