Comm Zamri speaking to policemen on duty during his visit to roadblocks in Petaling Jaya on Hari Raya Aidilfitri.

"Because of Covid-19, we cannot simply go to Sarawak, so we let them handle it first and we will send investigators if there is a need for a more thorough investigation," Comm Zamri told reporters after visiting the roadblock at the Kota Damansara toll plaza here on Hari Raya Aidilfitri.

He said the Sarawak CID chief had issued a press release stating that he was not involved and would investigate those spreading the allegations.

"That is on the criminal aspect, JIPS will investigate on the code of conduct aspect.

"If he is found to have mingled with unsavoury characters, he could face disciplinary action," Comm Zamri said, adding that for now, DCP Fisol had not been placed on leave as the allegations remained unproven.

He said they would compile information on the case and hand it over to the Inspector-General of Police. 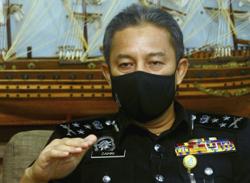