Property agent charged with fraudulent purchase of 281 watches worth RM3mil

KUALA LUMPUR (Bernama): A property agent pleaded not guilty at the Sessions Court here on Tuesday (May 11) on charges of cheating a watch store manager over the purchase of 281 watches of various brands worth RM3mil two years ago.

Tjoeng Chan Chin, 43, allegedly cheated Ng Chor Kee, 53, by deceiving him into believing that the accused had paid for the purchase of 281 watches with a cheque worth RM3mil, although the accused knew that the bank account belonged to a company that had closed down.

His deception led the victim to hand the watches over to the accused, as he would not have done so if he had not believed the accused.

He is charged with committing the offence at a watch store at a shopping mall in Lingkaran Syed Putra Kuala Lumpur, Brickfields here on Oct 25, 2019 under Section 420 of the Penal Code that stipulates a 10 year maximum prison term with whipping and a fine if found guilty.

"A high bail is to ensure the accused will not abscond, ” she said.

Lawyer K Jaikumaran, who represented the accused, requested for a lower bail as his client was supporting his unemployed wife, two children and his elderly parents. 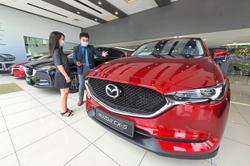