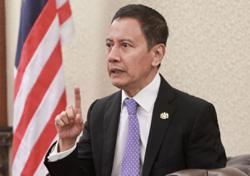 PETALING JAYA: Government expenditure during the Emergency will be made accountable when the Parliament is permitted to reconvene, says Dewan Rakyat Speaker Datuk Azhar Azizan Harun (pic), Utusan Malaysia reported.

"The Emergency Ordinance states that Parliament meetings, including hearings by the committees, will not go on as they are suspended during the Emergency period.

"I have referred the matter to Parliament's legal advisers.

"This does not mean that the check-and-balance process is not happening in Parliament although its meetings and that its committees have been suspended.

"On the contrary, all expenditure will be audited once the Emergency ends," he told Utusan Malaysia.

Azhar noted that there was no escaping the check-and-balance process for government expenditure.

Apart from the Parliament's Public Accounts Committee (PAC), the Rights and Freedoms Committee and Select Committee are required to convene when Parliament meets.

He said this in response to criticism by PAC chairman Wong Kah Woh on Monday (May 10) that his committee has been "paralysed" from performing its duty following the Emergency.

Wong said that the PAC last met on Jan 5 for hearings on procurement of Covid-19 vaccines but had been suspended together along with hearings on other matters.

He noted that the suspension meant that the committee could not continue its hearings over the use of the National Trust Fund for the procurement of vaccines.

The Yang di-Pertuan Agong Al-Sultan Abdullah Ri'ayatuddin Al-Mustafa Billah Shah proclaimed an Emergency on Jan 12 that will be enforced up to Aug 1 as a proactive measure to contain the worsening Covid-19 pandemic in Malaysia.