The message, among others, warned listeners that almost 2,000 pigs in two farms in Mile 12 in Sandakan had died of the disease and advised them not to consume pork because it is dangerous and could be harmful to human health.

Jeffrey, however, said only pigs at a small-scale commercial pig farm were infected with ASF, believed due to weak biosecurity.

“This commercial farm supplies pork for public consumption in Sandakan. It had about 450 and the population began to die on April 27,” he said.

“A total of 54 pigs died within six days,” he said, adding that more pigs had died since then.

Prior to these deaths, Sandakan had been declared as having an ASF outbreak on March 23.

Jeffrey said the Veterinary Services Department (DVS) was notified of the deaths on April 29, and samples were taken from the farm to facilitate investigations.

The Deputy Chief Minister said tests revealed that the samples were positive for ASF on May 2.

He said the DVS also found that the area is situated within a 5km radius of where ASF was detected among wild bearded pigs in March this year.

Jeffrey said the DVS suspects that the farm had failed to improve its biosecurity measures, resulting in ASF infection among its pig population.

The DVS prohibited the pigs from being taken out of the farm immediately after being informed of the deaths by the farm owner on April 29, and all remaining pigs have successfully been destroyed as of Sunday (May 9), he said.

Meanwhile, Jeffrey reminded owners that live pigs from other commercial farms in Sandakan are not allowed to leave the district unless they have received written permission from the DVS.

Jeffrey said the government would compensate owners whose pigs were culled for disease control purposes at a rate to be determined later.

“However, no compensation will be given if the pig died as a result of ASF before the culling exercise can be done,” he said.

Farmers in Sabah are reported to have lost RM400,000 as a result of the disease outbreak.

Jeffrey thanked farmers for their cooperation which he attributed to a recent dialogue held in Sandakan between the DVS, pig farm operators and pork sellers.

During the dialogue, the DVS emphasised the importance of stakeholder involvement in managing the ASF infection.

He also hoped that pig farm operators will continue to strengthen and enhance their farms’ biosecurity levels in order to combat ASF and prevent the disease from infecting their livestock.

“Despite this minor setback, the supply of local pigs remains secure, as the small farm contributed just 4% of Sandakan’s pork supply and less than 0.004% of Sabah’s pork requirements,” Jeffrey said.

“Other pig farms in Sandakan and other areas of Sabah are free of ASF,” he added.

To date, the virus has been detected in 11 districts. Nine districts have been declared ASF outbreak areas with Nabawan being the most recent on May 5.

Jeffrey assured consumers that pork sold in markets and pork retail outlets is safe to eat because all pigs are slaughtered in licensed abattoirs that are inspected on a regular basis.

Pigs in Sabah are not allowed to be slaughtered in unlicensed abattoirs. 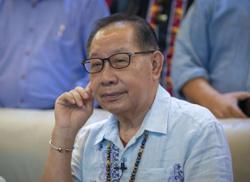