PETALING JAYA: Malaysians have been urged not to touch or collect any debris from China's 20-tonne Long March 5B rocket in the unlikely event any of it falls within the country, says the Malaysian Space Agency (MySA).

The core of the rocket, spotted circling the Earth in an unstable orbit since Thursday (May 6), is expected to make an unstable re-entry imminently, said director-general Azlikamil Napiah on Saturday (May 8).

Azlikamil said the rocket debris was still in orbit and approaching the re-entry point.

"In most cases of re-entry, uncertainties loom large due to changes in the atmospheric upper layer density rate, physical properties of re-entry objects such as mass and material composition as well as the location and velocity of the object," he said.

Azlikamil assured Malaysians not to worry about the debris as most would be destroyed in Earth's atmosphere during re-entry.

"Debris that is not fully incinerated in the atmosphere will land on earth," he said.

Azlikamil said it was unlikely for the space debris to land on Malaysia, as the country covered a relatively small area on the surface of Earth.

"The probability of this object hitting humans or destroying any building structures is very low, since 70% of Earth is made up of water and Malaysia is small.

"Additionally, the exact location of re-entry cannot be predicted accurately," he said, adding that MySA would announce any developments.

Azlikamil advised the public not to touch or collect any objects from the re-entry incident and call the emergency hotline at 999 if they come across it.

He also urged members of the public to take videos of the incident to assist any investigations if there is one and not to spread false information about the re-entry phenomenon.

In May last year, debris from another of China's Long March rockets fell on villages in the Ivory Coast, causing structural damage but fortunately no injuries or deaths were reported. 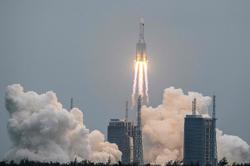 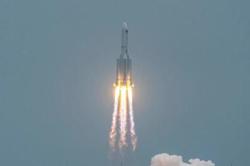